With Spacecrash we’ve seen how to complete a game. Here are my conclusions and next steps. 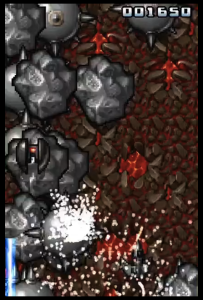 I started the Spacecrash one-week-game series with a question: “Can you write a game in one week?”. But the main point was addressing the reasons why people get stuck trying to complete their first game: be it for lack of technical skills, excessive scope, or a lack of a clear game concept and focus. After dedicating the whole last week to doing the project and sharing it, I’d like to review the thoughts of that first day in the light of what we have done.

[Note: I am not calling this a postmortem because there is one pending thing I still have to do, which is to balance the gameplay difficulty and content generation. I plan to do this in the next few days and do a proper postmortem after that. But I did want to think about and post the conclusions shortly after finishing the series.]

How did Spacecrash help with the main reasons why peple don’t finish games? Here are the details:

Hopefully this project showed some ways to get over common obstacles, including the mistakes or dead-ends I found during development. Myself, I will point people to this series in the next few years when they ask me how and what to do for their first game project.

Doing the project has also been an interesting experience for me. Apart from the pace which was a bit excessive, I have enjoyed it greatly, especially the gameplay and design challenges. Choosing a narrow scope provides a great frame where you can enjoy highly satisfying creative work.

But mainly, while doing this, I have come up with a lot of little-project ideas I’d like to do based on this. Let me list a few of them:

I am not going to do all of these, as my time is very limited and I have to choose very well what things I do. But I will do some of these: they are all interesting tasks for me to do, they are interesting enough to write about, and they would be of interest to many upcoming game developers.

So I’m going to use Spacecrash as a central theme to do other things: use it to probe the market in “minimum-viable-product” fashion, try gameplay and design variations and see how players receive them, do small technology tests in a well-controlled framework, etc… I will share the details, and that way it will be a good learning experience for many.

After I’ve addressed the gameplay/difficulty issue, watch out for the first mini-project which is most likely porting to iOS and publishing on Apple’s app store. Flash advance: I will first publish it as a paid app, and after I have collected the sales results for some time, I plan to switch to a free ad-supported model.

From here on: doing, sharing & training

My plan for the next few months is to ramp up my work in games. There are main areas where I plan to put in work:

The plan is that the paid training products and services will financially support the other parts (the other experiments, and the actual game-making itself). Let’s see how it works out, I’ll definitely have to tweak and adjust as I go along to make everything work out.

So watch out for new material coming often, and let me know what you would find interesting.

And on the last week of October, we are actually holding a new edition of the Gamecrash bootcamp in Calgary (Canada). It will be a hyper-intensive one-week games-development course I’ll be teaching for a small group of people, developers with experience in other areas who want to become games developers as fast as possible. Here you have a video explaining all the details:

Gamecrash: Become a Games Developer in One Week from Jon Beltran de Heredia on Vimeo.

Hope you like it, and if you are a developer who wants to get started in games in a single high-intensity, highly engaging week full of content, I hope you can come to Calgary for a week and see you there! Here are the links to sign up for the course (in-person is best, but remote attendance via online streaming is also possible at half the price).

Hope to see you there!

And if you want to be notified when I publish new materials to help you become a games developer, just fill in the form below:

4 Responses to “With Spacecrash we’ve seen how to complete a game. Here are my conclusions and next steps.”