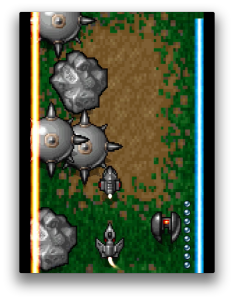 After we started to get some gameplay yesterday, let me take a bit of time and recap where we are. During the project, you have to focus and often need to work as fast as possible, but it’s important to raise your head every so often and make sure you know where you are and where you’re heading.

We are starting some gameplay out of the prototype in the current stage. It is sometimes genuinely fun to fly the ship manoeuvring between the rocks. The variety is low, but still it’s proven a bit of a challenge requiring me many attempts to reach the end of this level as posted yesterday: the end of the level is defined by the constant #define RACE_END 100000.f at the top, since each screen is 1500 units high, this means you need to fly 66 screenfuls without dying to complete it.

There are a few gameplay elements that are sure to add to the experience, at least in variety: my idea is to allow the ship to self-repair slowly by spending fuel, and I also want to add shooting rocket, extra clumps of fuel you can pick up, and also the possibility to slow down / accelerate at your own will. Apart from these gameplay elements, there are quite a few things I’m planning to add only for it to look, play and sound cool: sound effects, particle effects, nice background graphics, animations…

But let us not lose focus. All the elements above (both gameplay elements & all special effects) will not “fix” the core experience. That is something that is essential to the core gameplay. And there are some “gotchas” with the current model. 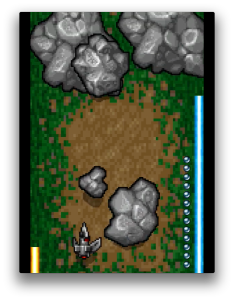 As a player, I’d stop playing after stumbling upon this. Not good.

The main limitation in the current gameplay is that the totally “random” distribution of rocks creates a very uncontrolled experience. You can fly for quite a while without encountering more than random easy-to-avoid rocks, and suddenly, you can stumble into a barrier formed by several rocks which there literally isn’t any way to avoid. This is tremendously frustrating, and it totally kills the player experience. The player wants to think that this is about their skills, and it’s very important for them to know that, when they fail, it was because of a mistake of them, and that they could fix it next time.

Don’t get me wrong, luck can play a role, even an important one. I have been playing plenty of Candy Crush Saga myself lately… and you can bet I think is more about luck than about anything else… but still tremendously addictive. But the point is that in CCS you still have some doubt about whether luck was the cause or not, and you can at least always play, even if you don’t beat the level! In Spacecrash, when you confront the player with a barrier of rocks without a single gap, they just feel insulted.

How can we address this? I can think of three different ways: