So we’re going to make a game from scratch in one week. We better define our goals quite well beforehand, or we will waste the time allotment just making up our minds. Also, the scope better be limited, or there is no way we will get it done in such a short timeframe. But if we really focus, and we use every trick in the book, it’s likely we can do something pretty cool.

Here are the main driving factors when thinking up what to do:

Apart from these constraints, there are a couple of extra things I want to contemplate:

Mulling over these concepts and looking for an interesting concept that fits, I went more or less down the following thought process: 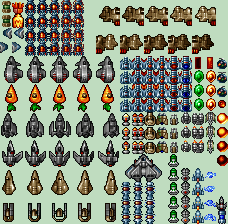 This is starting to look like something. We can have the main gameplay focused on manoeuvring the spaceship and avoiding obstacles. These obstacles can be generated procedurally, randomly and/or in patterns. We can probably find a lot of depth in this. Assuming the difficulty progresses as you advance in the level, the better the player is at this, the longer they will last. Not unlike a modern infinite runner (although I want levels in the game to have an end).

The speed of the game is an important factor. I haven’t mentioned it above, but I’m thinking about a pretty fast game. The world will scroll quite quickly, and it’s not just background decoration obstacles to avoid will be in this world, not “floating” slowly over it, so you have to react fast. It’s definitely a skill game requiring good reflexes. Maybe, this speed can be increased in each level for increased difficulty – we’ll see.

One last important point: a game based only in avoiding things has a limitation: the game can do some great effect when you crash into something, but it’s hard to do a nice, rewarding effect associated to not crashing, which is what should actually be rewarded! Positive feedback is much more hooking. So I thought about adding something to pick up to make the player try to steer to get things, not just to avoid things. Rather than random coins, let’s try to add “fuel” that you have to pick up which works also as fuel for the ship. It can be used as an additional way to let better players last longer.

The core game mechanics is the most important thing, either that hooks the player, or everything els is unimportant. But you also need some kind of progress around the game: levels, progress, game types… and I want to show the whole process in the project. So let’s draft it up:

Here’s roughly how I’m planning to organize the work during the development week:

I can already see several missing gaps in this plan: some gameplay variety with different elements, something special needed at the end of a level or the game… Bu it’s ok, I don’t have to nail everything, I will work it out as I go along. But, if we are going to make our target, we should not deviate much from the roadmap above.

I’ve seen multi-million dollar budget projects get started on a one-page-long design document with a similar amount of detail as above. There are always unknowns, and if you are really “risking it” creatively, there should be some. But the “general envelope” better be under control. The time estimation doesn’t look too unrealistic (only a bit). All in all, this is not that different from how many full-size projects are done. Let’s take the plunge and figure out the rest along the way!

And if you want to be notified when new articles to help you become a games developer are ready, just fill in the form below: